In each episode the team investigates one supposedly haunted town and zero in on two key locations. From a Victorian school to an abandoned hotel; from a historic theatre to a spooky forest; from underground Napoleonic war tunnels to a magnificent 1,000 year old castle. As a team we learn about the area’s history and hear stories of previous paranormal encounters. Then as the sun goes down the hunt for paranormal activity begins...

Kay Nambiar is a Dutch television presenter (MTV, INSIGHT), musician, reality TV star and model. Kay doesn't believe in ghosts, but he's always wondered what lies behind the stories. So he's on a journey, in search of definitive proof of whether or not ghosts really exist.

Ian Lawman is a world-renowned psychic medium, known for his work on shows such as Haunting: Australia, Living with the Dead, Most Haunted, Fit & Fearless and I'm Famous & Frightened. Ian uses his sixth sense to hone in on the spiritual activity at each location, guiding the team to where he believes we are most likely to experience something paranormal, and maybe even capture evidence of it.

The paranormal investigators on the show are myself and my good friend and fellow investigator Paul Hobday. Paul and I have been investigating the paranormal together for many years as part of Team IMPACT and as the resident paranormal investigators at Woodchester Mansion in Gloucestershire, England. Prior to Ghost Chasers, I appeared on various paranormal TV shows including Ghost Hunters International and Great British Ghosts, and Paul was on Living TV's Paranormal Investigation: Live. We are the open-minded skeptics of the Ghost Chasers team, providing rational explanations for what might be going on, whilst trying to capture solid evidence of the paranormal activity reported at each location.

Ghost Chasers is a 10-episode series filmed in 2016 at locations across the UK and Europe. During the series we take Kay on a journey of discovery, starting with his first ever ghost hunt at the Ragged School in London. Over the 10 episodes and 20 locations, the aim is to provide Kay with experiences and evidence to help him decide whether or not ghosts really exist.

So what makes Ghost Chasers different to other paranormal TV shows out there?

Ghost Chasers was first broadcast on INSIGHT television in the U.K. (Sky channel 564) in March-April 2017.

Ghost Chasers is also being broadcast on INSIGHT's television channel around the world. The channel is currently available in:

If you missed it, Ghost Chasers is available 24/7 on demand via INSIGHT's website and mobile app. To find out more, visit their website here: www.insight.tv

And in case you can't find it, Ghost Chasers is located on INSIGHT's website here: www.insight.tv/category/ghost-chasers 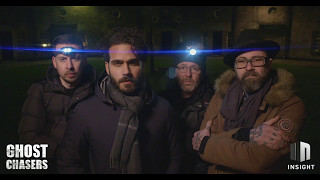